After the Second World War, British and American aircraft carriers loaded a large number of aircraft.  However, it is not easy for these carrier-borne aircraft to land on the short and narrow angled deck,the pilot had an accident because of his poor choice of landing spot.  If the landing point is too front, the aircraft is easy to rush out of the ship deck, or even fall into the sea;  If it is too far behind, the plane may collide with the stern.

In order to solve this headache problem, the British and America navies had to select a number of professional guiders on the deck of aircraft carriers using flags to guide aircraft landing.  This requires both rich command experience and strong visual ability of the guider.  However, accidents continue to follow.  British and American naval authorities had to look for elsewhere.

In 1952, British Navy Lieutenant Colonel Gerthart designed an early optical landing device, the landing mirror, inspired by the female secretary's lipstick in front of a mirror.He designed an early optical descent device-the descent mirror.  It is a large curvature mirror, and the light located at the stern of the ship is reflected into the mirror and then into the air, giving the pilot a descent slope of light (at an Angle of 3.5-4 degrees from the sea level) along which the pilot corrects the error with the aircraft's position in the mirror until he lands safely.

But this kind of optics mirror only work up to a point.  A new problem arises: the hulls of aircraft carriers heave and sway as the waves rise and fall, and the light from the mirrors is so unstable that accidents are still inevitable.

In the 1960s, the UK invented a more advanced "Fresnel" lens optical landing system, which is similar to the principle of the landing lens, but also provides a light in the sky under the landslide surface, but this provides a signal more conducive to the pilot to determine the position, correction error.  The United States officially installed the first one on the USS Franklin in 1960. 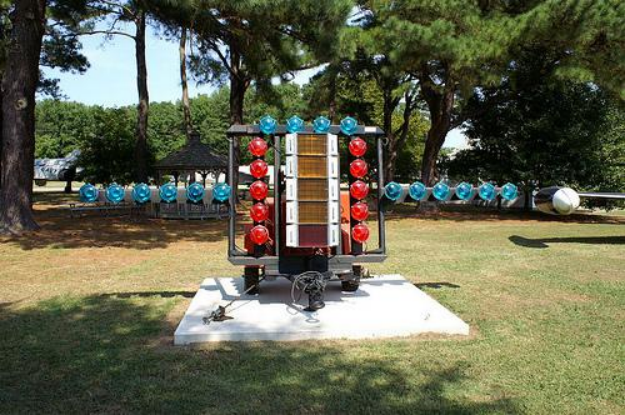 The difference between this device and the original device is that there is a light source behind the mirror, through which three different colors of yellow, red and orange light can be emitted, and the three kinds of light can be used to define the high and low position. The lighting arrangement of the descending lamp set is dazzling to the uninitiated: six green lights are installed on each side of the frame as a horizontal reference; The left and right sides are equipped with 5 red no descent lights; In the middle of the frame, there are five "Fresnel" lenses arranged lengthwise.